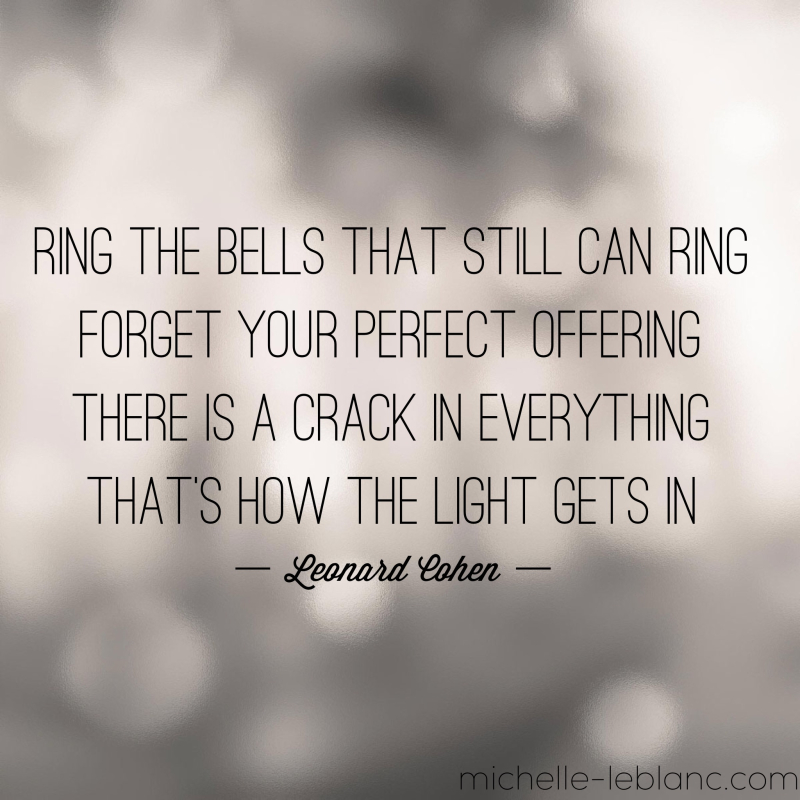 The birds they sang
at the break of day
Start again
I heard them say
Don't dwell on what
has passed away
or what is yet to be.
Ah the wars they will
be fought again
The holy dove
She will be caught again
bought and sold
and bought again
the dove is never free.
Ring the bells that still can ring
Forget your perfect offering
There is a crack in everything
That's how the light gets in.
We asked for signs
the signs were sent:
the birth betrayed
the marriage spent
Yeah the widowhood
of every government --
signs for all to see.
I can't run no more
with that lawless crowd
while the killers in high places
say their prayers out loud.
But they've summoned, they've summoned up
a thundercloud
and they're going to hear from me.
Ring the bells that still can ring ...
You can…

I saw this tweet today, and it got me thinking about national pride and patriotism.

I hope nobody will judge America by that disgusting half time show for the Super Bowl. What was that?! #Late #ThanksYouTube

I was about to reply that I liked the halftime show, but then I stopped myself. That wasn't the part of the tweet to which I really wanted to respond.

I do hope that the rest of the world judges America by that halftime show. Think about all of the elements that were in it. A powerful, self-made woman has forged a decades-long career as an artist who has constantly pushed the boundaries of tolerance and censorship. She bared her body and danced in a way that is forbidden in many parts of the world, and even punishable by death. She shared the stage with women and men of different races and, presumably, different sexual orientations and religions. Think about how much our own country has changed. Can you imagine Madonna performing the Super Bowl halftime show thirty, twenty, or even ten years ago? I can't. She wasn't ready for it then, and it wasn't ready for her. The rest of the world watches what the United States does. Others take their cues from us, for better or for worse. For the most part, though, things are better here than elsewhere, and things are better now than they have been in the past.

It is election season and, even though we are only in the primaries, partisan politics are ugly already. Each side considers itself to be the true patriots, the true Americans, but both are wrong. Patriotism is a "devoted love, support, and defense of one's country," not one's political party. There are flaws in our system. Our country has its troubles but, if you are true patriot, you love it, you support it, and you defend it. That doesn't mean you have to accept the status quo, but you do need to acknowledge the things that are great about America. Our country was founded on the principles of individualism and equality. That is what has afforded you the right to express your opinion about a middle-aged white lady and fat black man singing on a stage halfway through an inexplicably popular sporting event. And I support that.

Getting mad at AIG is like getting mad at your small child for eating the entire candy bar your father-in-law gave her. Maybe you should focus your outrage on the person who gave your kid the candy bar with no instruction about how to consume it.